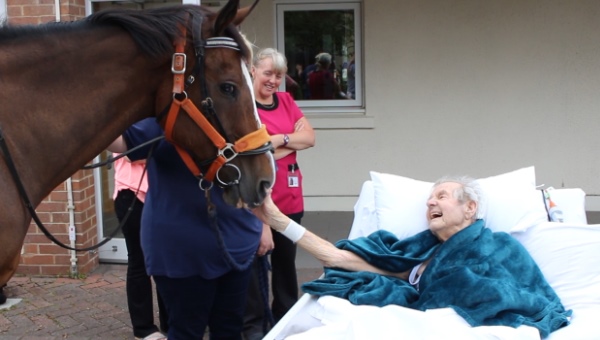 He'd loved horses all his life, so it was a pleasure to give him one final encounter

We often talk about going ‘above and beyond’ for our patients and their families, helping to make a difference in whatever way possible. This happens on a daily basis at North Devon Hospice, but it doesn’t always involve bringing a horse on to the premises!

However, that is what happened recently after our nursing team were talking to a patient, Patrick Saunders, who was staying on our Bedded Unit. Patrick was telling the nurses about his love of horses, having been around them his entire life.

Cathy Whattingham, one of the nurses caring for Patrick that day, said: “His passion for horses was so clear and they’d obviously played a big part in his life. We happen to be next door to the North Devon Equine Rescue Centre, so we thought we’d see if they might be able to bring a horse to the hospice to visit Patrick. One phone call later and there was a beautiful brown stallion stood outside the front door of the hospice!”

Patrick was not well enough to get out of bed to see the horse, but the nurses wheeled his bed into the courtyard so he could meet his special visitor close up.

It was Patrick’s father, Victor, who gave him his love of all things equine, having worked with horse in the First World War. In a beautiful twist of fate, the name of the horse that came to visit him at the hospice, was also called Victor.

Patrick was clearly overjoyed by his visit from Victor the horse, and got to feed him apples, carrots and polo mints (a horse’s favourite by all accounts).

This experience came as a real surprise to Patrick’s daughter, Jayne, who had come to visit her dad and arrived to see him stroking the gentle animal outside the hospice. “I simply didn’t expect him to have an experience like that at the hospice!” she said. “He’d actually had a couple of bad days and wasn’t himself at all, but he was absolutely full of beans when I arrived and you could see the joy on his face from being able to interact with such a gorgeous animal. Horses have played a big part in our family’s life, so this was a very special moment.”

Patrick taught his future wife, Wendy, to ride at his family’s stables when she was just 15 years old. Soon after they were to be married and in 2017 they celebrated their 66th anniversary. Patrick had also taught all their children to ride, so it was a pleasure to give him this experience at the hospice.

Cathy said it was clear how much it meant to him. “I’ll never forget Patrick’s smile when he was stroking that horse’s face. You could see they had real connection and it is experiences like that which make hospice care so special. We may not be able to put days into life, but we can put life into the days of our patients.”

Sadly, Patrick died at the hospice just 3 days later. But Jayne said his final days had been brightened no end by his visit from Victor the horse. “When they told me that a horse was coming to visit Dad, I thought that maybe he would be able to see the animal from his balcony. I had no idea he would be able to get so close. But that’s what the hospice is all about, going above and beyond. People can be fearful of the word ‘hospice’, unless you know better, like we do now. I now see North Devon Hospice as a really positive place where we were all so well looked after. It’s something I’ll never forget.”

For more information about the care and support provided by the hospice, please visit www.northdevonhospice.org.uk.

We believe in being there for all the family.

Keep up to date with North Devon Hospice news and information.