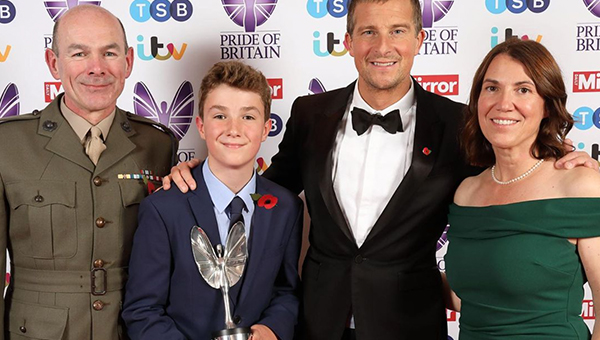 Max Woosey has spent more than 500 nights sleeping under canvas, raising £640,000 for North Devon Hospice, becoming known to people across the world as 'The Boy in the Tent.'

He has been honoured with a prestigious Pride of Britain award, which was presented to him this week by his hero Bear Grylls, at a star-studded ceremony broadcast on ITV.

Neighbour and family friend Rick Abbott was terminally ill with cancer when he gave Max a tent, and told him to “go have an adventure”.

When Rick passed away, Max decided to do a sponsored camp out to raise money for the hospice which had cared for his friend in his final weeks. In March 2020, he set himself the target of sleeping in the tent until the end of lockdown, and hoped he might raise £100.

As lockdown restrictions dragged on, Max refused to come in from the cold and donations poured into his JustGiving page. Now, over 18 months later, he is still on his fundraising mission.

At 8pm each night, the 11-year-old puts on his pyjamas, collects up his teddies, the Beano and his torch, says goodnight to his parents and makes his way to the garden. The marathon camper has now been sleeping outdoors for more than 500 nights, braving sub-zero frosts, heatwaves, and even Storm Bella.

He has raised more than £640,000 for North Devon Hospice, enough to pay for 15 community nurses and cover more than half the hospice’s estimated losses due to the pandemic.

Max has also inspired thousands of other children to take part in Max’s Big Camp Out which raised awareness of children’s mental health, and says: “It makes me so happy to know I’m helping other people. There was a time the tent collapsed and it was soaking and I was tired and I came in and started crying, but I went back out.”

He adds: “I am so honoured to win a Pride of Britain Award. I have loved almost every minute of it. I never thought I would win such an award, after all I am just sleeping!”

Proud mum Rachael said: “No matter how awful the weather is he goes out night after night and will not give up. It has been an incredible 18 months, he has shown true grit and determination and winning a Pride of Britain award is the absolute cherry on the cake. It just goes to show what children can achieve if we listen to them and let them have a go.”

Of the star-studded awards ceremony, Rachel said: "It was incredibly surreal to be surrounded by so many famous people, but we were reminded by the organisers that they were all here for the award winners. They were all here to meet people like Max, so all the celebrities were so happy to chat with us and hear more about his fundraising adventure. It honestly feels like a dream, but it was an incredible experience. Max thoroughly enjoyed himself and we all had a real once-in-a-lifetime experience."

Stephen Roberts, Chief Executive of North Devon Hospice, said this award was richly deserved. "We could not be more proud of Max. He has made such a huge difference to the care being provided by the hospice, but he takes it all in his stride. He was already the Pride of North Devon, and now we're delighted that he has been recognised as the Pride of Britain too. It is an honour he truly deserves."

The youngest person we supported was just 4 years old.