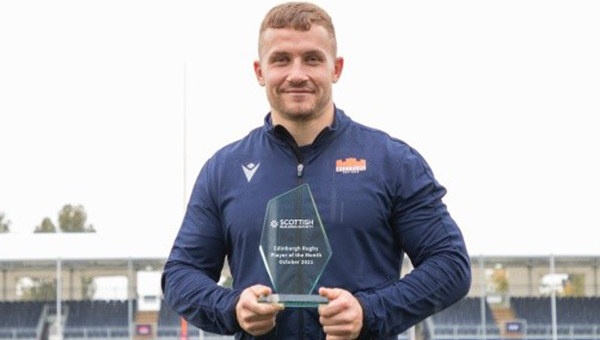 Ben Vellacott, raised in North Devon, remembered his roots when awarded Player of the Month for Edinburgh Rugby

Ben Vellacott has been named as Edinburgh Rugby Player of the Month for October and chose to give the accompanying £500 donation, courtesy of Scottish Building Society, to North Devon Hospice.

North Devon lad Ben learned his trade at Barnstaple Rugby Club, before going on to play for Exeter Chiefs, Gloucester and Wasps, before joining Edinburgh this summer.

The scrum-half was selected from a shortlist of four players nominated by Head Coach, Mike Blair, and fans then voted for their favourite online.

To mark his achievement main Club Partner, Scottish Building Society, has made a donation of £500 to Ben’s selected charity, North Devon Hospice. The funding will be used to support our vital work in providing specialist care and support to local people who are affected by a life-limiting illness.

Reacting to being voted Scottish Building Society Player of the Month, Vellacott, said: “I am over the moon to be nominated as Player of the Month and I can’t thank our fans enough for their support throughout October, it’s been an absolute pleasure playing.

“It’s brilliant to see North Devon Hospice receive vital funds to keep their services going and I’m massively thankful to Scottish Building Society for providing such a generous donation. It’s a charity which is very close to both mine and my family’s heart, so hopefully this donation will help them continue to do great work moving forward.”

Head Coach Mike Blair, added: “We’re delighted to see Ben recognised for his fantastic start to the season. He’s been in great form and a pleasure to work with from a coaching perspective.

“He has contributed from a leadership standpoint both on and off the park while his performances have added to what has been a really promising start to the URC.”

Stephen Roberts, Chief Executive of North Devon Hospice, said: "It's great to see a local lad be so successful in professional sport, and we're very humbled that he has thought of North Devon Hospice for this donation. Ben is a great role model for kids in North Devon, and he's just shown another reason why youngsters can look up to him. The donation will help our care teams look after patients and families when it matters most."

Paul Denton, Chief Executive Officer for Scottish Building Society, said: “Ben is a very worthwhile winner for his strong performances against both Scarlets and Benetton when his electric pace made a real impact on the game.

“Scottish Building Society is a mutual which mean that we are committed to giving back and supporting local communities and this is why we have recognised Ben’s achievements on the pitch with a donation to his preferred charity of North Devon Hospice to support their invaluable work."