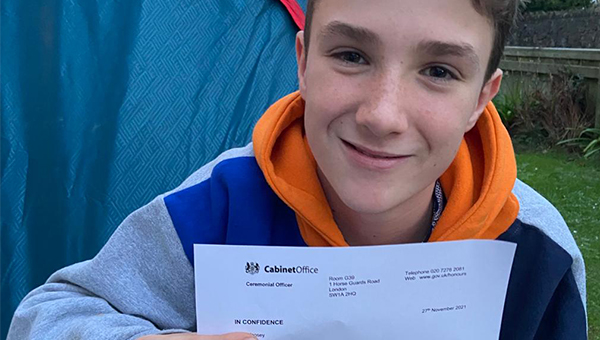 'The Boy in the Tent' is awarded the British Empire Medal

After camping in his back garden for over 600 consecutive nights, to raise money for North Devon Hospice, Max Woosey has been named in the Queen’s New Year’s Honours list. The 12-year-old schoolboy from Braunton was awarded the British Empire Medal for raising nearly £700,000 for his local hospice, and inspiring people around the world with his exploits during lockdown.

Max began camping in his back garden when the first national lockdown was announced, in March 2020. He wanted to raise £100 for the hospice who had just cared for his friend and neighbour Rick Abbot. Before Rick died, the keen adventurer gave Max his tent and told him to go and have an adventure with it. Since then Max’s story has captured the hearts of countless people across the world, with donations flooding into his Just Giving fundraising page and raising a staggering amount for the hospice who cared for his family friend.

The ultimate honour came when he became the second-youngest person to every be honoured by the Queen. Max said, “I’m so excited by this, but the hospice are the true heroes, they’ve done all the incredible work to look after people. I just hope this award will help raise some more money for them.”

When asked what Rick would think of his exploits, Max said, “I think he would be surprised that I’m still out here after 600 nights, but I think if he were here he would 100% be in a tent beside me and sharing the adventure.”

Having gained international fame for his commitment to the cause, Max’s adventures have included a trip to 10 Downing Street, being invited to camp on the pitch at Twickenham and being named a Pride of Britain award winner.

North Devon Hospice’s chief executive, Stephen Roberts, said: “Every single plaudit that comes Max’s way is totally deserved. And to think it all started from that one moment, when the hospice team came to visit his neighbour. Sometimes life offers you small opportunities that could lead to big things. Be like Max and seize those opportunities with both hands.”

To donate to Max’s fundraising efforts, and help support local people who rely on the support of North Devon Hospice, visit www.justgiving.com/max-woosey1.

We need to raise over £4.5 million every year, from scratch, to provide our care and support.