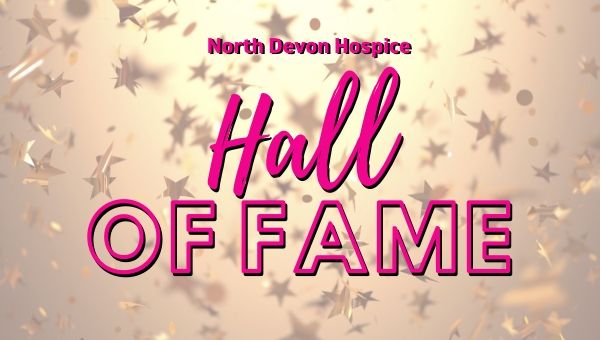 The Rotary Club of Braunton Caen, in partnership with the Rotary Clubs of Barnstaple, Barnstaple Link, Bideford Bridge, Bideford Tarka, eClub South West Peninsula, Holsworthy and Ilfracombe, worked together to raise money by holding a virtual balloon race! 827 colourful balloons were "launched" in aid of North Devon Hospice on Easter Sunday from Istanbul in Turkey, and finished seven days later. ‘Phoebe’ the winning Balloon travelled an incredible 776 km and was last seen heading for Alexandria!

Thank you all for your hard work and energy to put on this event, it is truly appreciated. Because of you, patients and family members who are living with an incurable illness can have support in their own homes as well as on the bedded unit today. For some time, Jenny had been known to say " the year I turn 40, I will shave my head for charity". This year Jenny turns 40, and she's done exactly what she always said she would, she shaved her head! Thank you for all your support Jenny and huge congratulations to you for raising an incredible £2,315 for North Devon Hospice. With your support, patients and families living with life-limiting illnesses can receive the specialist care and support they need. 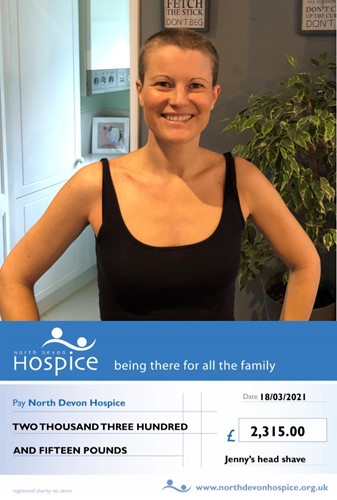 Wow! The incredible Titans Netball club took on a January Running Lockdown Challenge and managed to run 998 miles between them, raising a whooping £500.00 by donating 50 pence per mile. They presented the cheque to North Devon Hospice because it has touched so many of our members lives and in loving memory of coach, Jo Elliott.

Thank you Titans for helping families living with an incurable illness in North Devon right now and well done for staying motivated and active during lockdown - you are all stars! THE UK SALES AND MARKETING TEAM AT ACCORD UK

A huge thank you to the UK Sales and Marketing team at Accord UK who took part in a virtual fundraising challenge; walking, running, cycling or swimming the distance between all four of the Accord UK sites (833.3 miles). The team raised an incredible £3,000 and clocked up an astonishing 3237.57 miles (smashing the original target).

Thank you to you all for taking on such an epic challenge and supporting our patients and their families during these uncertain times. Pictured here presenting the virtual cheque to hospice corporate fundraiser, Claire Paine, is Pete Kelly, Accord UK Managing Director. 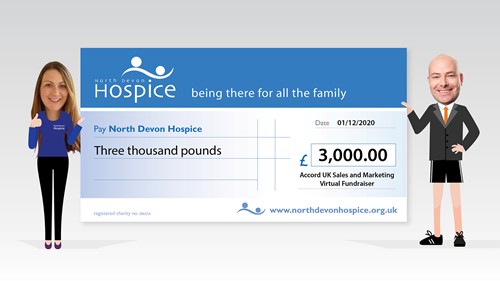 Having previously experienced with her family the work the hospice does, Katie wanted to help make sure care could continue to be given to patients and their families during this difficult time, so she put her running shoes. Over 25 days, Katie ran an incredible 250km - the equivalent of 6 marathons! Including gift aid, she has raised an amazing £1,122.50 for patients facing life-limiting illness and their families. Jenny Rutter & Janet Goodall from the Riverside Support Group and Maddy from Everything Westward presented a wonderful £4227.15 for North Devon Hospice. This incredible total was raised be sewing and selling face masks. Huge thanks to Jenny who has crafted each lovely mask and to Everything Westward who kindly sell the masks in their beautiful shop. The money raised will help families who are facing the toughest times this festive season. To honour his late Step Nan, 11-year-old Ben wanted to take on a personal challenge. Ben decided he was going to try running, and set himself the task of running 5k and asking for sponsorship. He sailed pass his initial target of £100, and has raised a brilliant £1,105 in memory of his Step Nan, thank you so much Ben! 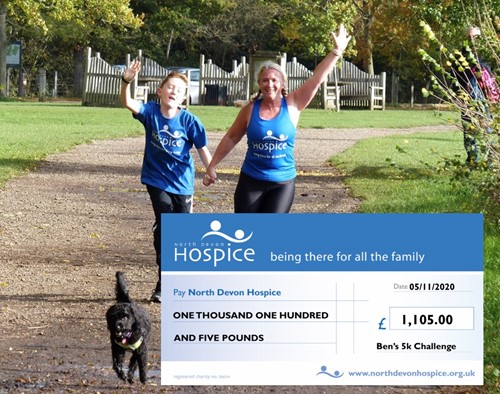 For the 20th year, the Sloley Farm Open returned to Saunton Golf Club. Organised by John Boxall, this year's competition saw 16 teams take to the West Course on a sunny October day, and raised an incredible £1,330. Thank you so much to everyone for taking part, to North Devon Account for sponsoring the event, and to John Boxall for all your support. 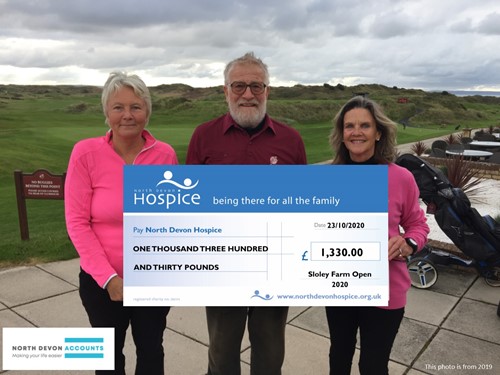 Max has been camping out for over 200 nights now, and his goal is to camp out for a whole year! So far he's raised over £62,700, a true inspiration. 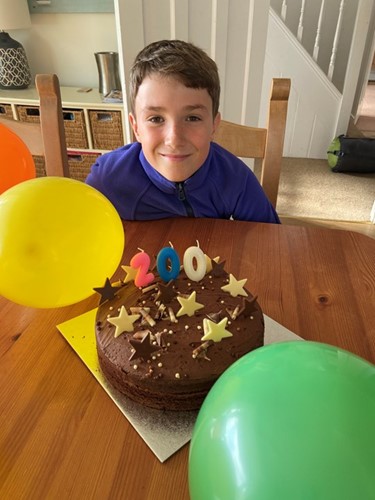 THE HORSE AND GROOM

Having already done a sponsored head and beard shave earlier in the year, Paul and friends from The Horse and Groom this time took on a sponsored bike ride from The Horse and Groom to The Kings Arms Bideford and back. From sponsorship and money collected on the day, they've raised a brilliant £1,264.47 for the hospice. Thank you so much to you all! FLOWERS FOR THE HOSPICE

Jackie Rudman and Chris Walsh have been growing and delivering flowers throughout the summer and raised a wonderful £1804.24! Thank you Jackie and Chris for raising smiles with your flowers and by supporting North Devon Hospice.

Jackie gives her thanks to outlets; The Good Food company at St Johns Garden Centre as well as at Ashford Garden Centre and Twigs florist in Newport. Despite the difficulties of operating within Covid restrictions these businesses have been really supportive in selling the flowers and bringing the work of the Hospice to the public notice. Thanks too, to volunteer pickers Chris Wright and Margaret Kemp and of course the generous people of North Devon who have ordered flowers regularly from Jackie. 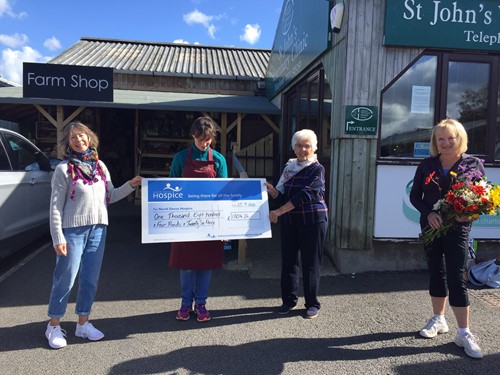 Each year, Andrea sets herself the target of raising more than the year before by selling pre-loved items online. She does this in memory of her dad who was cared for at home by hospice nurses. Her latest total is an incredible £1,216 which will help people like Andrea's dad receive the support they need at home. Thank you Andrea and everyone that supports her. 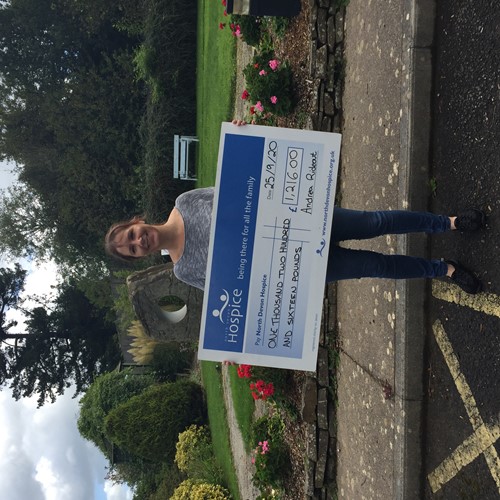 Clare Langmead took on the serious challenge of walking Lynton to Combe Martin and back in memory of her mum. Supported by her good friend, Amy, daughter, Nik and her niece, Amber. They managed to complete the walk in one day and presented a whooping £810.17 to North Devon Hospice who cared for Claire’s mum in her final days. What a special tribute and challenge to take on, thank you Claire and all who supported her. Jane & Geoff Marshall presented an incredible £4227.00 to North Devon Hospice to help families facing an incurable illness today. They raised this phenomenal amount making and selling face masks.  Grateful thanks to Jane and Geoff for all their hard work. Thanks to Croyde Post Office and Cherry Tree Farm campsite for selling the masks and to all those who helped and supported. 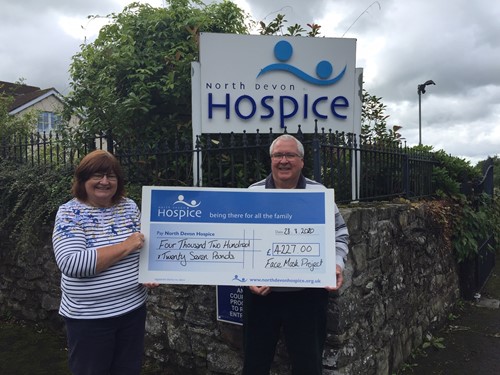 Paul Bevan and the other residents of Pynes Walk, Bideford have been busy raising money whilst socially distanced from their own gardens throughout lockdown! Bingo & dancing outside your own front door were regular features in the Pynes Walk community after the Thursday Night applause. They raised a huge amount of cheer and a whooping £4077.47. Here they've come together in their family bubbles for a cheque photo to celebrate their amazing fundraising! Despite his jump date being postponed due to lockdown, it all worked out for the best for Glenn - this change of plan meant he could complete his skydive in memory of his mum on her birthday. Glenn raised an amazing £1863.67 and had the experience of a lifetime, well done! 8 year old Ruby decided to fundraise by setting herself the challenge to climb Mount Everest on her stairs at home! She climbed her stairs 3,229 times throughout a month to reach her goal and raise over £400.00. What an amazing commitment! And she even made this lovely t-shirt to celebrate. Jenny signed up to the Hospice Hair Raiser and decided her challenge would be to shave her head. She raised over £2,000 in the process and got a new look which really works for her, good on you Jenny! 10-year-old Max from Braunton started a sponsored camp-out in his back garden at the beginning of lockdown. He's now gone past 100 consecutive nights and raised over £8,500! After her mum was cared for by the hospice, Janet wanted to do something special. She bravely said goodbye to her curly hair, raised over £1300, and is rocking a fab new look! 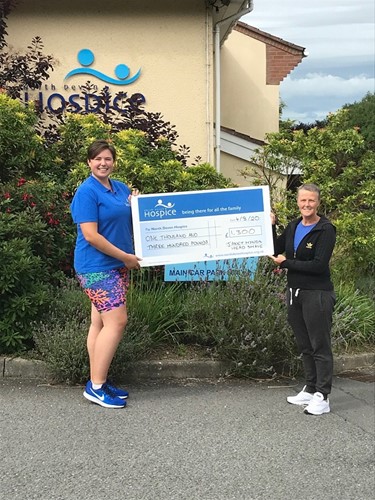 These wonderful ladies have made hundreds of brightly coloured face coverings for the Fremington community. This amazing undertaking has kept them busy and helped them stay positive, while also providing a local service which has increased the confidence of residents, all while raising over £1000 for two local charities! Fiona took part in the CHSW Virtual 5km Rainbow Run, but took it a step further by running 55km over a weekend. She raised an amazing £741, which inspired Fiona and her husband Andrew to help even more people by matching that amount with a donation to North Devon Hospice, incredible! Zac is a keen runner and during lockdown decided to run a half marathon from his home to his school. Along with dad Bill, Zac completed his challenge in 1 hour 51 minutes and raised over £1,000 on the way. Well done Zac! After he couldn't make the new date of the North Devon Marathon in 2020, James decided to run the route on the original date, so that he could still raise funds for the hospice! He raised £150, good on you James! These two were missing being able to perform, so they thought they'd stream a live gig to entertain and raise some money. Nice one guys! Freddie and Maddy took to the pool everyday no matter the weather, to swim 19km from the North Devon coast to Lundy. It was chilly at times but that didn't stop them, great job you two! Remember someone close to you and make a difference.

Whatever you're into, have fun while raising funds!

Push yourself, make a difference. We cover one of the largest catchment areas of any hospice in the UK, over 800 square miles.