Over 35 years of history 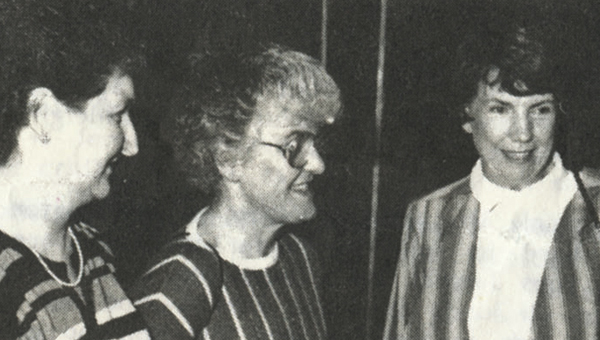 Caring for local people for more than three decades

From humble beginnings in 1984, we now offer care and support to thousands of people every year throughout North Devon.

North Devon Hospice was founded in 1981 by local people who saw the need to provide specialist care for people in North Devon who were affected by a life-limiting illness.

After 3 years of planning and fundraising, we recruited our first home care nurse.  For the next three years, the hospice operated a community nursing service from a small terraced house in Vicarage Lawn in the centre of Barnstaple.

In 1987, our Day Care service was added, offering the chance for patients to spend the day with us to meet others in a similar situation and have consultations with our specialist nurses.  In 1990 the services expanded by purchasing the house next door and knocking through to create a larger area for patients to gather.

In 1993, we moved to our present site at Deer Park, Newport; an Edwardian property set in large grounds with panoramic views of Barnstaple and the estuary. This move was kindly facilitated by Vivian Moon and his fellow directors of Webbers Estate Agents, who owned the property previously.

In 1998, the 'Diana, Princess of Wales' wing was opened by the broadcaster, Martyn Lewis. This extension was built primarily to house the extensive complementary therapy service we offer, as well as rooms for our support groups and The Retreat; a quiet area for reflection and peace.

In 2002 and 2003, we ran a successful appeal to raise the money needed to build a Bedded Unit extension at Deer Park, so that 24-hour care could be provided to those most in need. This was a huge undertaking, both in terms of raising funds and the additional provision of care. It was the most significant event in the hospice's history, since appointing our very first nurse in 1984, and changed the landscape of end-of-life care in North Devon.

In June 2005, we admitted the first patient to our new 7-bedded in-patient facility.

Her Royal Highness, The Princess Royal, officially opened the hospice's new bedded unit on 10 April 2006. The visit was a fitting tribute to the people of North Devon who generously understood that providing 24-hour hospice care to those most in need in our community is not a luxury, but a necessity.

In 2009, thanks to a government grant, we were able to open the Terrace Café and brand new kitchen facilities at Deer Park. The café is the hub of the building, where patients, families, visitors, volunteers and staff all mix together over a cuppa or some freshly prepared food. The new kitchens allow us to be more responsive to the dietary needs of our patients, cooking them what they need, when they need it.

In 2015, after 2 years of planning and fundraising, we opened our first outreach centre in Holsworthy.  From this purpose-built centre, called The Long House, we could now offer patients and their families care and support much closer to home, eliminating the need for them to make a 2-hour round trip to our main site in Barnstaple.

You are at the heart of everything we do

Our patients and their families are the reason why we are here.

North Devon Hospice named Charity of the Year in 2014.

Meet some of the team

How the hospice is run to provide the best care and support.

Some frequently asked questions about the hospice, how we are funded and what we do.

There are plenty of ways you can get in touch.

Read our latest publications and reports.

Knowing you are there, even in my darkest moments, helps me carry on

If you have any questions, please contact North Devon Hospice.

Your donation makes a difference