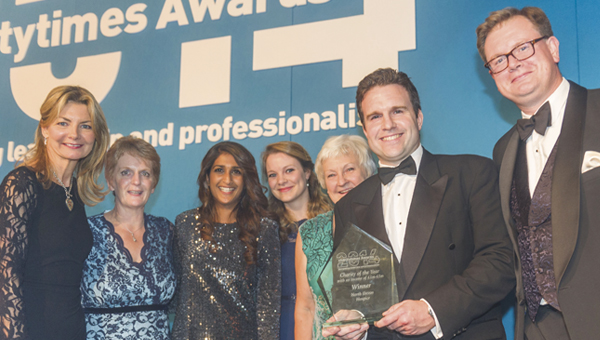 Our work has been met with national acclaim on many occasions

With thanks to Regional, National and International organisations for recognising the work of the hospice in the local community.

The Queen's Award for Voluntary Service
The entire body of volunteers at the hospice have been given the royal seal of approval for their incredible contribution to the community.  The lifetime award is the highest honour for volunteer groups and is equivalent to an MBE. It recognises outstanding achievement by groups of volunteers who regularly devote their time to improving quality of life in their community.

Charity Times Awards 2014 - UK Charity of the Year
We were delighted when North Devon Hospice was named as Charity of the Year at the Charity Times Awards.  Our outstanding care was recognised at a national level, with specific praise going to our new Hospice to Home service, which not only allows patients to remain at home with round-the-clock care, but also avoids distressing and unnecessary admissions to A&E.

Nursing Times Awards 2012 - Cancer Nurse of the Year, Mary Brooks
Mary Brooks has been a Specialist Community Nurse with North Devon Hospice for 22 years. She has become known throughout the area as an outstanding nurse, and is held in high regard by her fellow healthcare professionals with whom she has worked closely for more than two decades. Mary was nominated not just for the longevity but the quality of her work. The dedication to North Devon Hospice has continued for Mary since her retirement from nursing, as she has now become a trustee of the charity, helping to steer the organisation and lend her weight of experience to the planning of future care services.

Third Sector Awards 2012 - Highly commended for 'Financial Management' and shortlisted for 'Volunteer of the Year'
After two wins in 2010, North Devon Hospice was highly commended for their financial management, which saw us make considerable savings across the board. These savings were made without the need for staff losses or to reduce patient care. In fact, the savings allowed us to invest more in providing care closer to home for people throughout rural North Devon. Cathy Richards was also nominated as Volunteer of the Year for her incredible dedication in our Lynton charity shop. Cathy runs the shop on an entirely voluntary basis, and puts in a huge amount of time to make the shop successful, but it is her skill, passion and charisma that set her apart. It is an amazing achievement to be recognised at a national level in this way.

Interact Intranet Competition 2011 - Joint worldwide winner
In 2011, we were incredibly lucky to become one of the winners of Interact Intranet's worldwide competition, where a charity could win £30,000 worth of intranet software and consultancy. We had been planning for an intranet for some time, knowing we'd make considerable efficiency savings (in both time and charitable money), so we knew what a positive impact this software would have on the charity. This win was just amazing and still leaves us speechless as we were up against charities from around the world, but we were able to demonstrate what a difference it would make and how it would allow us to become even more efficient in our practices. It will continue to have a positive impact on the charity year-on-year and we are incredibly grateful to Interact for their expertise, professionalism, amazing software and their fantastic team of people.

Energyshare Competition 2011 - Winner of 'Small Project' category
After an online campaign to secure the votes of our local community, North Devon Hospice became one of six winners of Energyshare 2011.  Our proposed project, to install solar panels on our Bedded Unit roof, was supported by thousands of people. The solar panels arrived in early 2011 and are working very well, allowing us to save thousands of pounds every year on our energy costs.

Third Sector Awards 2010 - Winner of 'Best Financial Management' and 'Best Fundraising Event'
North Devon Hospice won two Third Sector Awards in 2010.  These awards recognise excellence in the non-profit, charity and voluntary sector across the whole country. They are the most prestigious awards of the entire industry, so for a local charity such as North Devon Hospice to pick up two is unprecedented.

As the winner of 'Best Financial Management' the charity was nominated for having run the hospice for the same money as the previous financial year, while still investing heavily in our care teams. Despite the difficult financial climate, we proved to be prudent and sensible with our finances, making savings and efficiencies where possible without cutting staff or sacrificing patient care. In fact, quite the opposite was true, because making these savings across the organisation allowed us to almost double the capacity of our Community Clinical Nurse Specialist team.

We also won the award for 'Best Fundraising Event' for the English National Sheep Dog Trials & Devon Country Fayre, held at Filleigh in August 2009. This award was a particular surprise as we were up against national and international charities, including Guide Dogs, Save the Children and Shelter. The event was the most successful in the hospice's 25 year history, raising an amazing £82,000. The three-day extravaganza offered activities for all the family, and was both a logistical and financial success. The whole community rallied round to support the event, from the dozens of local businesses who became sponsors and the hundreds of volunteers who manned the event to the thousands of spectators who poured through the gates.

You are at the heart of everything we do

Our patients and their families are the reason why we are here.

Meet some of the team

How the hospice is run to provide the best care and support.

Over 35 years of history

In 1984 we had a hospice nurse on a bike and now, we have specialist teams working across North Devon.

There are plenty of ways you can get in touch.

Some frequently asked questions about the hospice, how we are funded and what we do.

Read our latest publications and reports.

If you have any questions, please contact North Devon Hospice.

Look behind the scenes